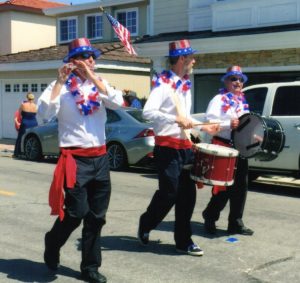 It was a beautiful Friday morning on Lido Isle in Newport Beach and also the 4th of July.  The Fire Department Hook and Ladder lead off the event.  You know if they have to go to a fire, all they have to do is put the pedal to the metal. That’s the reason they need to be in front.  Secondly the Boy Scouts are marching in formation with the American Flag.  Thirdly comes the band with fife and drum to make a BIG NOISE.  Then we have the March-Mellows, a group of ladies from the Island all dressed up in white and each carrying an umbrella.  The March-Mellows were also in formation.  Then came the veterans.  We had veterans as far back as World War II with signs on the side of their favorite toys (Hot Cars, convertibles, motorcycles, and race cars that normally do not  drive on streets).  And , of course all the neighborhood kids were following along with decorated bikes and wagons but they weren’t as organized as the Boy Scouts and March-Mellows.  We marched around the island, which is about 2 miles, once and then went to the next party.  Lots of FUN with FUN people to celebrate our great nation.

This is one of the continuing adventures of Fred’s String Band’s live performances.  For more about our appearances, and all our services, go to www.fredstringband.com  We hope to see you live and in person soon making music at your event.  For more Information, please call 949-642-1686 and ask for Will.